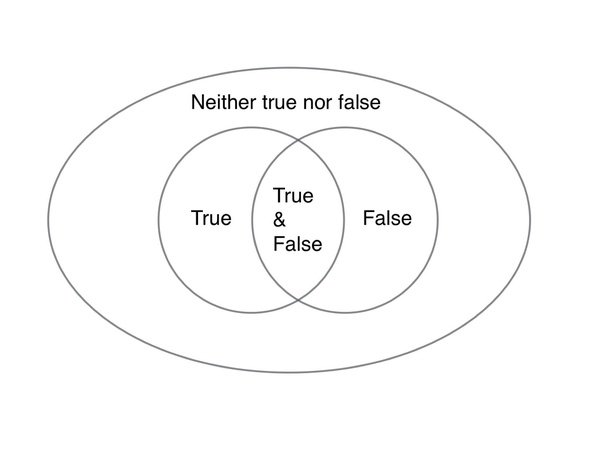 From the beginning, Buddhism has emphasized a logical structure. Examples of this can be found in the structure of the (midwifery) talks and discourses of the Buddha.

The basic structure can be found in the logical tetralemma:

This formulation, which is very often found back in the oldest texts, provides the 'key' to most 'typical Buddhist problems' towards their 'understanding' or their 'inconceivability' (e.g. the anatta-doctrine, the conception of sunyata, or the teaching of Totality within the Avatamsaka-teachings [see later]). What seems 'illogical' according to the binary logic (the so-called Aristotelian logic), becomes clear through the perspective of this tetralemma.

With its dissemination Buddhism unavoidably came into contact with other Indian spiritual currents. From this arose the necessity of having a set of polemic instruments at its disposal with which it could answer the argumentations of the formal-logically structured Hindu darsanas (especially Nyaya and Vaisesika).

In relation to this J. Takakusu says in his 'Essentials of Buddhist Philosophy': "Buddhist Logic is not a formal logic of thought, but is rather a logic of dispute or debate which lays stress on the investigation of cause, relations and possibility and is therefore an art of argumentation and refutation." We can see this need strongly represented in Nagarjuna, but even more decidedly with Vasubandhu, who by way of his view on the trayasatya (Three Truths) gave rise to the implementation of a clear Buddhist formal logic.

It is however Vasubandhu's disciple Dinnaga who is generally accepted as the factual founder of this logic. In his Nyaya-pravesa (also called Nyaya-mukha), 'Introduction to Logic', he explains the new lines of thought based on the 'knowledge of causality' (hetu-vidya). He supports his claims on the 'three forms of causality' (lingasya trini-rupani) by way of the 'nine necessitating causes' (hetu), in which he replaces the - until then - usual comparative method with a sharp method of deduction which expresses itself in new syllogistic formulations. His works are - except for the aforementioned Nyaya-pravesa and some Sanskrit fragments - mainly preserved in Chinese and Tibetan translations.

A next important step in Buddhist Logic was taken by Dharmakirti (7th Century ?). Concerned about the decline of the Teaching in India, he searched for new structures of argumentation. In his works Pramana-varttika, Pramana-viniscaya, but especially in his Nyaya-bindu he points out that names and relations are only instituted by mind, whereas the sense-functions represent their objects of experience accurately, unless of course they are distorted and perverted.

This is an excerpt of an article published by www.akshin.net [original URL], a site I've found to be currently offline. In order to preserve this text which gives a pretty good overview of the concept of Tetralemma, I've published it on my webpage as it helps to understand the background of the Tetralemma technique in family constellations - in full respect of the intellectual ownership of the person(s) behind akshin.net. Please visit their website if you are interested in other buddhist concepts of thinking. Hopefully it will soon be online again.

Discussions in the PT Board: